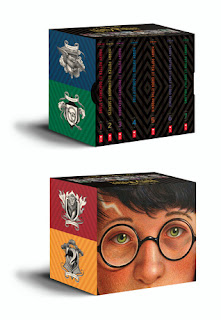 My Series Sunday pick is Harry Potter Special 20th Anniversary Edition Box Set by J.K. Rowling. Yes, I am 20 years late to the Harry Potter bandwagon. The wizardry finally got me! Thanks to Amazon's Black Friday deal, I scored the special edition box set of books #1-7 for only $35 (originally $100)!

Of course I heard of the series, but read nary a page nor seen a minute of the movies. Though I admire how fans Potterheads stan for the series a whole two decades later. Potterheads are like the literary version of the BeyHive. So I ordered the complete bestselling series on a shopping whim and cannot wait to start in the new year. It looks quite nice under my Christmas tree with its redesigned illustrations.

My plans are to buddy read with my 9-year-old niece. We will read a book followed by watching the corresponding movie in the series, then post vlog (YouTube) and blog reviews here. Stay tuned for our journey through Harry Potter fantasy land as we read over 4,000+ pages together!