The Guy Who Died Twice 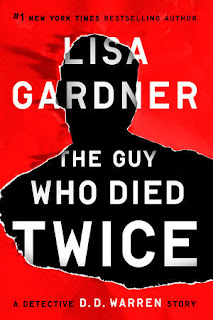 "Whatever was going on in this house of wealth and privilege, it had clearly been taking its toll on the residents. A wife who appeared to be exhausted. A husband who'd started the day claiming to be a corpse, and ended the day being one." ~ 11%

A man walks into the police headquarters and tries to convince the squad that's he is dead. Of course they explain to him that he is very much alive and breathing, then send him on his way. But a few hours later, the man turns up actually dead. No, this is not a corny joke. It is the strangest case that Detective D.D. Warren has ever confronted. This is the short story of The Guy Who Died Twice.

Even though this new release is part of the Detective D.D. Warren series, it can be read as a standalone short story. It will make a great introduction to the main character and her crime scene analyst husband for those unfamiliar. Lisa Gardner is one of those consistent authors; you can count on great storytelling.


Disclaimer: This book was received directly from the publisher for review purposes only. In no way does it influence my review. The opinions I have expressed are my own and would be the same if I spent my hard-earned coins.