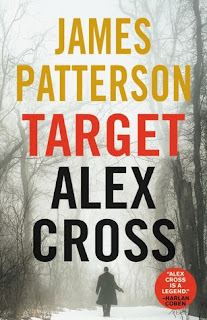 "I've been weak-kneed and grateful a thousand times since it happened." ~ pg. 144

It is bad enough when I compare books to other authors' books. But it is a fine line when I compare books written by the same author. Maybe it is because I am still stuck on the greatness of Patterson/Clinton's My President is Missing. But Target missed the mark a bit. I would expect a heck of a lot more suspense if the Head of State, Cabinet members, and other key positions in the government are picked off one by one thanks to snipers. Bottom line: the story had potential to be a page-turner but fell a tad short. Patterson, I KNOW you can do better. But thanks for the okay read anyway. It is always nice to check in on the Cross family.